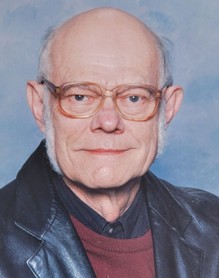 William R. Brown, Ph.D passed away at the age of 88 on October 26th, 2022. He is survived by his sons Daniel and Eric, and four grandchildren. Bill was an English Professor Emeritus at Quinnipiac University, where he taught for 31 years. He graduated from Middle Tennessee State University and earned his Ph.D in English from the University of Arkansas. Bill specialized in American Literature, literature and religion, composition, linguistics, and informal logic, and was part of the first English Department at Quinnipiac College, where he sponsored and coached the debate society. Bill presented at several conferences and generated many publications in his areas of interest.
Bill was born and raised in Murfreesboro, TN, and after serving at the Valley Forge Army Hospital, he met his future wife Pearl while attending graduate school. Ultimately they married and settled in Bethany, CT, where they raised their family and were both English professors at Quinnipiac University. Bill was an active member of his church and community. He held leadership positions at his church, was a board member of his town library, and was involved in Boy Scouts and Little League. He was an avid bicyclist, enjoyed bird watching, working on his property, and woodworking. He had a keen intellect and was difficult to beat at chess and Scrabble. Bill was a thoughtful, moral and generous man who had a strong work ethic, a good sense of humor, and a kind heart. He was dedicated to his family and spent as much time as he could with his children and grandchildren. He was devoted to his wife of 60 years, Pearl L. Brown, who predeceased him by just over a year. Thank you Bill for everything you have contributed!
A memorial service will be held on November 19th at 3:00PM, at Christ Episcopal Church, 526 Amity Road, Bethany, CT 06524. A reception will follow. Memorial donations in Bill’s name can be made to the Clark Memorial Library in Bethany, CT. Arrangements in care of Beecher & Bennett Funeral Home, 2300 Whitney Ave., Hamden, CT. Condolences may be sent to Bill’s family at 32 Northrop Rd., Bethany, CT 06525.