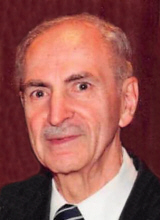 William S. 'Bill' DeMayo, Jr., 88, of New Haven, passed away at his home on January 25, 2018. Bill was born in New Haven on April 6, 1929 to the late William DeMayo Sr. and Aida DiRocco DeMayo. He will be remembered by his nieces and their husbands, Elizabeth DeMayo & Tim Koelle of New York, NY and Catherine DeMayo & Ian McGregor of Sydney, Australia; great-nieces and nephews, Sophia & Anthony DeMayo Schwab and Marilena & Andrew McGregor DeMayo; and by his sister-in-law, Eileen DeMayo. He was predeceased by his brother, The Honorable Anthony DeMayo. Bill received his Bachelors Degree from the University of Maryland before being employed by Robertshaw Controls Company as a personnel director. He was a proud U.S. Army Veteran, serving from 1953 - 1955 as a lieutenant, and had been a parishioner at St. Bernadette’s Church. Bill was a huge Red Sox fan and enjoyed watching the UConn Women’s basketball team. Along with his brother, Bill was a contributor to the East Haven Library when its new wing was added, and helped create a scholarship in his parents’ name to benefit students at UConn School of Law. Friends may visit with his family at BEECHER & BENNETT, 2300 Whitney Ave., Hamden, CT on Wednesday, January 31st from 4 to 7 p.m. His Funeral Service will be celebrated in the funeral home on Thursday morning at 10 a.m. followed by burial in St. Lawrence Cemetery.