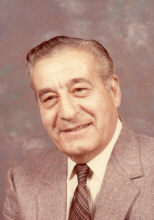 William S. Rossi, 97, passed away on April 19, 2010 at Connecticut Hospice, after a brief illness. Born Dec. 9th 1912, he was the oldest child of Domenic Rossi and Filomena (Maturo) Rossi of New Haven, who emigrated from the Naples area of Italy. Know to his friends as Bill, Rossi learned the plumbing trade as a teenager, being forced to leave school to assist his family, as was the custom in that day. He later earned a high school equivalency diploma, and took some courses at New Haven College. Rossi joined the National Guard in the late 1930's, and at the outbreak of WW II joined the Seabees, serving in the Pacific Theatre on both Saipan and Tinian islands. He discovered an active volcanic crater on Tinian, that to this day is known as 'Rossi's Crater.' On returning home in 1945, Rossi was active is progressive politics pursuant to social justice, ran for alderman in New Haven, and joined the NAACP, being one of it's first caucasian members in New Haven. In 1949 he married Christine Giaquinto of New Haven, and in 1952 son Marc was born. The family moved to Hamden in 1957, and in 1961 Rossi formed 'Rossi Bros. Plumbing and Heating Co,' with his late brother Anthony. Bill and Christine Rossi divorced in 1972, and in 1973 Rossi married Melatina Krainess of West Haven. They remained married until her death in 1991. During this period Rossi taught plumbing for the state of Connecticut, and became a member of the Connecticut Building Officials Association (CBOA) serving as an active building inspector until his retirement at age 86. The CBOA scholarship, given to a graduating high school senior entering the construction trades, is known as the 'William S. Rossi Scholarship,' and for many years Rossi presented it personally at the association's annual meeting. In 1993, Rossi met Dorothy Catinello, and she remained his companion until her death in Nov. 2009. Bill Rossi was a Mason, and this was central to his life. He was a long-time member of Trumbull Lodge No. 22 in New Haven, having taken his Masonic degrees in 1952 under the direction of Worshipful Master Bertram M. Martus, and for the last decade had served as the lodge's tiler. Rossi was designated by Trumbull Lodge an 'Honorary Past Master' and was presented an apron attesting to his status by vote of the lodge. In addition, in recent years, Rossi visited local schools and spoke about his experiences in the service during WW II. However, he spoke primarily about peace, seeing war as the last resort, and urged students to seek peace and try to create greater harmony in the world. Rossi is survived by son Marc, a composer, pianist, and Professor at the Berklee College of Music in Boston, a sister Anne Pacelle of Southington CT. (his six other siblings are deceased) a nephew Frank Rossi of New Haven, a niece and nephew, Thomas and Maryanne Petrosino of Charlotte N.C, nephews Robert and Paul Volpe of St. Louis, MO and nieces Dana Pacelle and Lisa (Pacelle) Leary. Friends may visit with the family Saturday, April 24th from 4 to 7:30 p.m. at BEECHER & BENNETT, 2300 Whitney Ave., Hamden, followed by an Interdenominational Funeral Service and Masonic Service. Memorial contributions in William's memory may be made to Connecticut Hospice, 100 Double Beach Rd., Branford, CT 06405.