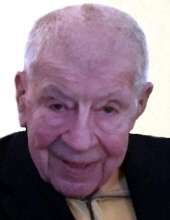 William Taft Hiller, 91, passed away on December 28, 2019 at St. Francis Hospital after a brief illness. He had the opportunity to visit with his children and grandchildren over the holidays before he passed, memories his family will cherish. He was born in Meriden on March 9, 1928 to the late Milton and Rena Taft Hiller. William was preceded in death by his wife, Barbara Jeffers Hiller, and his second wife, Audrey Kamens Hiller. He resided with his son Jeffrey Hiller and Jeff's family; wife Jane, and daughters Nicole and Melissa, in Rocky Hill for the past ten years. Besides his son Jeff and his family, William leaves his other children, Susan Holding of Dartmouth MA, children Emily, Brady and Ben; son, William Jr. of East Otis, MA and wife Paula, children Nicholas and wife Sara, Jesse and Ali; son, Robert of Meriden and wife Susan, and daughter Amanda. In addition, he leaves Linda Birdsey and her daughters Meghan and husband James; and Casey with her sons Franklyn and Jaxon. His brother, David, still resides in Wallingford. His sister, Barbara Sanderson, preceded him in death. William grew up in Meriden, where he graduated from Meriden High School Class of 1946, and attended UCONN and Quinnipiac College. For most of his life he worked at International Silver in Meriden, starting on the shop floor as a teenager and retiring as part of the Manufacturing Management Team. At the end of his career, he had a small business making pewter giftware and fiber woven wicker furniture. When he retired, he moved with his second wife Audrey to Myrtle Beach, SC, where he enjoyed the mild winter weather. Since he was a young adult, he summered in East Otis, MA where he met his first wife Barbara, and enjoyed many happy summers there on the lake watching his children and grandchildren. William loved to travel and went on many cruises. He was an avid sports fan and enjoyed watching his grandchildren participate in their sporting events. William was proud of his patriotic service in the Army, where as a young man he served as Quartermaster in New Jersey at Fort Dix from 1953 to 1955. During this time, he graduated from the U.S. Army Finance School at Fort Benjamin, Ind. During his service, William earned a Good Conduct Medal and a National Defense Service Medal. He received an honorable discharge in 1961 after serving as an Army Reservist. Private arrangements for William are in the care of BEECHER & BENNETT-FLATOW FUNERAL HOME, 48 Cook Ave, Meriden. Contributions in his memory may be made to Wounded Warrior Project at www.woundedwarriorproject.org, St. Jude Children's Research Hospital at www.stjude.org, The Salvation Army at www.salvationarmyusa.org, or Shriners Hospital for Children at www.lovetotherescue.org.