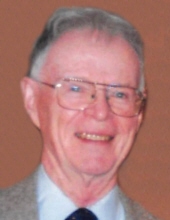 William T. O'Connor, Sr., age 94, of Hamden, passed away at his home on December 21, 2018. He was the husband of Mary E. (Braden) O'Connor. Born in New Haven on November 10, 1924, he was a son of the late Timothy G. & Marion (Butler) O'Connor. William is survived by his children, Ellen (Lou) Cusano, Mary Beth (Bob) Stewart, and William (Peggy) O'Connor, all of Hamden; grandchildren Ryan (Meghan), Richard, & Brendan Pogonelski, William &Timothy O'Connor, and Caitlin & Daniel Cusano; and brother Richard O'Connor of Wallingford. He was predeceased by his brother Francis 'Bud' O'Connor. William was a veteran, serving in the Army Air Corps during WWII. A lifelong resident of Hamden, he attended the Junior College of Commerce (now Quinnipiac) and later entered the insurance field, earning his C.P.C.U. from the Insurance Institute of America. He worked for the Middlesex Mutual Assurance Co. for many years, and retired as the Senior Vice President of Claims. William took great pride in his grandchildren and especially loved attending all of their sporting events, making him an avid supporter of the Hamden Youth Hockey and Hamden High School Hockey teams. Friends may attend his funeral on Thursday, December 27th at 10:00 a.m. from Beecher & Bennett Funeral Home, 2300 Whitney Ave., Hamden, followed by his Mass of Christian Burial to be celebrated at 11:00 a.m. at Our Lady of Mt. Carmel Church, 2819 Whitney Ave. Friends may also visit with his family at the funeral home on Wednesday from 4:00 to 7:00 p.m. Burial will take place in St. Mary's Cemetery, Hamden. Contributions in William's memory may be made to St. Jude Children Hospital at: www.stjude.org/give/memorials.