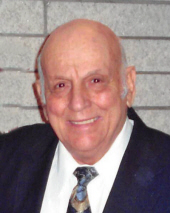 William V. Albano, age 86, of Hamden, passed away on April 10, 2015 at Connecticut Hospice in Branford. William was predeceased by his wife Marie T. Zullo Albano. Born in New Haven on July 6, 1928, he was a son of the late Geno Albano and Lena Fiorillo Bencivenga and the step-son of the late John Bencivenga. William was a US Army Veteran and was a salesman for American Micro Film and Speeds Inc. before his retirement. He is survived by his daughters, Nancy Zaehringer & her husband Karl of Hamden and Marianne Warner & her husband Edward of Hamden; grandfather of Atty. Kristen Zaehringer, Jessica Warner, Nicole Cioffi and Elisa Zizza; great-grandfather of Valentina Iriarte and brother of the late James & George Albano. He was a member of Knights of Columbus, Rev. Carl Sherer Council 10871, the Melebus Club and the Holy Name Society of St. Francis Church in New Haven. He enjoyed attending the Old Legion Avenue Reunions. William's family would like to thank the doctors, nurses and all the staff of Sister Louise Anthony 3 of YNHH at St. Raphael Campus for their care and compassion and being their Dad's 'Angels.' His funeral will be held on Tuesday at 12:30 PM from Beecher & Bennett Funeral Home, 2300 Whitney Ave, Hamden followed by his Mass of Christian Burial to be celebrated at 1:30 PM in St. Stephen's Church, 400 Ridge Rd, Hamden. Friends may also visit with his family at the funeral home on Tuesday morning from 10:00 AM to 12:30 PM. Burial with Military Honors will take place in St. Mary's Cemetery. Contributions in his memory may be made to St. Jude's Children Research Hospital, P.O. Box 613377, Memphis, TN 38101.