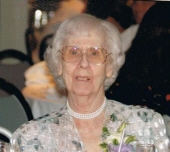 Winifred M. Sokol, 85, wife of the late Robert P. Sokol, Sr., formerly of New Haven, passed away Monday, June 14, in Rhode Island. She was born in New Haven, October 26, 1924 a daughter of the late Theodore A. and Delena Podvin Fitzgerald and was a graduate of Commercial High School. She was the founder and owner of the former Colonial Flower Shop in New Haven from 1970 to 1993, and a member of the CT Florist Assoc., and Teleflora. Mrs. Sokol is survived by her son Robert P. Sokol, Jr, and his wife Virginia Sokol of Mendon, MA, 4 grandchildren, Kelly Pagan, Joseph Sokol, Susan Campbell, and Matthew Sokol, and 3 great-grandchildren. Funeral service Friday, June 18 at 10 AM at BEECHER & BENNETT, 2300 WHITNEY AVE., HAMDEN. Friends may visit with the family Thursday from 5-8 PM. Interment in Evergreen Cemetery.