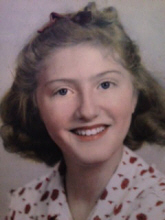 Yvonne 'Jackie' Jacqueline (Hill) Logan, loving wife of the late James T. Logan Jr. passed away peacefully on Friday, May 23, 2014 at MidState Medical Center. She was born April 10, 1929 in Meriden daughter of the late George and Yvonne Hill. Jackie was a member of South Meriden Trinity United Methodist Church, where she also taught Sunday school, was a president of the South Meriden Volunteer Fire Department Women's Auxiliary and Meriden Grange member. She worked and volunteered at the Meriden Humane Society. She was an adoring mother, who will be greatly missed by; Sandra and the late Dennis St. Pierre, Cynthia and Wayne Gdovin , James and Robyn Logan, April and Steve Steadman, Ellen Logan, Kelly and Patrice Logan. She is the loving grandmother of thirteen grandchildren, twenty-one great-grandchildren, one great-great grandson and one great-great granddaughter due this week. She is predeceased by her sister, sister-in-laws, brother-in-laws and nephews. The Logan Family wishes to express their sincere appreciation to thank the nursing staff and respiratory team on Pavilion C at MidState Medical Center for their care and compassion. Jackie's funeral will be held on Thursday, May 29, 2014 at 9:30am from the Beecher & Bennett-Flatow Funeral Home, 48 Cook Ave., Meriden followed by a funeral service at 10:30am at South Meriden Trinity United Methodist Church, 145 Main St., South Meriden. Burial will follow at Walnut Grove Cemetery. Relatives and friends may call at the funeral home on Wednesday, May 28, 2014 from 5-8pm. Memorial donations in Jackie's memory may be made to the Meriden Humane Society, www.meridenhumanesocietyct.com/#! ,311 Murdock Ave., Meriden, CT 06450.