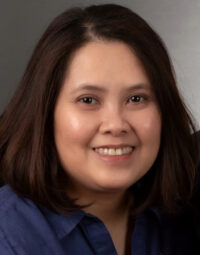 Surrounded by family in her Hamden, CT home, Zerline Mae Justado Esmer, 51, passed away early Thursday, January 12, 2023 due to complications from stage IV breast cancer. She began her battle with her disease in 2010, when she was first diagnosed with stage I breast cancer. After a decade of remission, she was diagnosed with stage IV breast cancer in December 2020. She is survived by her husband, Rogelio Esmer, 55; her three children, Kristina Esmer, 23, Julian Esmer, 20, and Justin Esmer, 19; her siblings Antonio “Joe” Justado, Jr., 53, and Jennifer Justado, 50; and her miniature schnauzer Tucker, 13. She is predeceased by her mother, Ardena Causing Timonera, her father, Antonio Natividad Justado, Sr., and her eldest brother, Alfredo Tonard Justado.
Born on February 13, 1971 in Pasay City, Philippines, Zerline made her way to the United Arab Emirates to further her career as a nurse. There, she met and married her husband Rogelio in Abu Dhabi, where they had their daughter Kristina in 1999. The family of three made their way to the United States in 2001, where they first resided in New York, later moving to Connecticut. Zerline’s sons Julian and Justin were born in New Haven, CT in 2002 and 2003, respectively, and the family has since resided in Hamden.
Zerline found a community within the New Haven Seventh-day Adventist Church in New Haven. Her hobbies included playing piano, singing, and cooking. Growing up, she and her siblings were involved in their church’s choir. Her love for music led her to encourage her own children to pursue music as well, in and out of the church. One of her greatest passions, however, was her devotion to helping others.
Her 19-year-long career as an OR nurse at Yale New Haven Hospital remains a hallmark of the generosity that defined her life, and now her legacy. Zerline dedicated her life to helping others and loving fiercely. She instilled these same values and sentiments in those around her, both at work and in her personal life. Co-workers remember Zerline as a special soul, describing her as someone who brought a bright and passionate energy with her every time she showed up to her shifts. And working earnestly alongside family and friends, Zerline was also an instrumental part of the OurKids4KidsVision, a non-profit organization that provides humanitarian relief to impoverished communities in the Philippines.
Friends are invited to join Zerline’s family for a wake on Saturday, January 21 from 4:00 pm to 7:00 pm at Beecher & Bennett Funeral Home (2300 Whitney Avenue, Hamden, CT 06518). A memorial service celebrating her life will be held on Zerline’s 52nd birthday on Monday, February 13 at 9:00 am at the New Haven Seventh-day Adventist Church (355 Humphrey Street, New Haven, CT 06511).